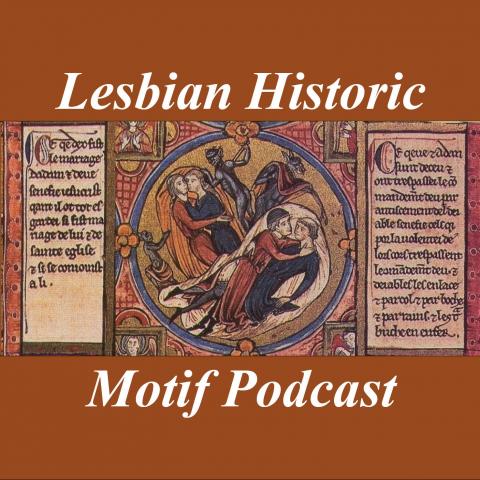 Maybe I’m a bit late to the gate for a favorite things of 2018 list, but it can take me a while to ponder my choices. This is a list of books--both fiction and non-fiction--and movies relating to lesbian history that I enjoyed in 2018. I’m not claiming that this is any sort of “best of” list. How could it be? I can only talk about the things that I had the time and opportunity to enjoy. And it’s very specifically chosen from things that I read or saw in 2018, not things that came out in 2018. I always feel sorry for authors whose books come out in December when people draw up lists based on year of release! Some of these works came out decades ago and I only picked them up to read in the last year. And I confess that for the non-fiction I focused on whole books rather than individual journal articles.

I thought a bit about how to organize this list and finally decided that chronology of topic would be the most arbitrary and therefore the most fair.

1. Roman Homosexuality by Craig A. Williams form Oxford University Press. I read this for the blog when I was doing a series of posts on publications covering sexuality in classical Rome. For quite some time I’ve been trying to get my head around scholarly explanations of how ancient Romans thought about gender and sexuality and why the modern categories of heterosexual and homosexual don’t really make sense in that context. Too often those explanations end up feeling like an erasure of non-normative sexuality. Williams was the first author who presented the material in a way that finally made sense to me. I still think he has some blind spots in terms of women’s sexuality. Like many male academics, he doesn’t try very hard to work past the male-dominated documentary sources to consider that women in the society he’s studying just might have understood their lives differently from what men said about them. But for the most part, he not only does a good job, but he presents the material in an evenhanded and non-judgmental way.

2. My next favorite thing covers a broad swath of time, so I’m arbitrarily placing it second. The collection of articles The Lesbian Premodern, edited by Noreen Giffney, Michelle M. Sauer, and Diane Watt includes articles covering specific topics from the medieval and early modern period, but also a number of theoretical articles about the study of lesbian history--what it means and how it can be done. I really enjoyed reading about scholars who are thinking and talking about many of the same issues that inspired the Lesbian Historic Motif Project, even though they’re looking at them from an entirely different angle. What does it mean to look for lesbians in the past? How does the search for identity both inspire and interfere with academic goals? How do philosophical conflicts among scholars affect what types of history get studied, and how? I found a lot of parallels in this collection between approaches to the study of lesbian history and considerations in the writing of lesbian historical fiction. And it gave me a lot of food for thought.

3. My next favorite item in chronology is...The Favourite, the recent movie about England’s Queen Anne and the rivalry between two of her courtiers for her affection and influence in the early 18th century. I took full advantage of this topic to do a show about Queen Anne within the historic context (https://www.alpennia.com/blog/lesbian-historic-motif-podcast-episode-29d...), a review of the movie with two reviewers, and then another show about the satirical writings of one of her contemporaries (https://www.alpennia.com/blog/lesbian-historic-motif-podcast-episode-30d...) who envisioned a secret lesbian society in a satirical fantasy. The reign of Queen Anne isn’t a particularly popular time for setting historical fiction. It’s not the wild and lascivious Restoration or that novelist’s favorite, the Regency or Georgian era. But maybe people will be inspired by this movie to take a closer look.

4. Number four in my chronology is the first of the several fictional works I enjoyed in 2018. With a late 18th century setting, Alyssa Cole’s novella “That Could Be Enough” set a high benchmark for lesbian historical fiction. Her characters not only reflect a possible early American understanding of women who love women, but very specifically the experiences of women of color in post-Revolutionary America.

5. The fictional works in this list all fall in a fairly tight time period, with number 5 being Emma Donoghue’s Life Mask, about the aristocratic sculptor Anne Damer during an extended period around 1800. This can’t really be classified as a lesbian historical romance--much more like a historical novel in which the main character has a lesbian romance. I haven’t written my full review of this book yet, but it falls in that genre of novels where the historical details are the focus and the personal stories are the medium through which we experience them. The sapphic happy ending is a long time coming in the book, and the reader will learn a vast amount about the details of English politics in the mean time. Probably much more than the average reader is interested in. But I have a great fondness for novels that help ground me in the details of history though the lives of the people participating in them. I learned most of my English chronology from authors like Jean Plaidy and Norah Lofts. Emma Donoghue writes in that same vein but focusing on women who loved women.

6.  In sixth place comes an entry into one of my favorite genres: the Regency Romance. The Covert Captain by Jeannelle M. Ferreira has gender disguise, desperate pining, veterans of Waterloo with post-traumatic stress, and lots of historically supported love between women. One of my aspirations is to write a lesbian Regency in the tradition of Georgette Heyer, but until I write my own, I’m happy to feast on contributions such as The Covert Captain.

7. Real-life Regency-era women didn’t fall far behind fiction in terms of whacked-out adventure and romance. The book Mary Diana Dods: A Gentleman and a Scholar by Betty T. Bennett reads almost like an academic mystery novel, tracing the research that led Bennett from trying to pin down a couple of minor footnotes in her book about Mary Shelley, to discovering a story of mystery, gender disguise, literary pseudonyms, and marriage between two women that has the added excitement of intersecting the life of writer Mary Shelley. If anyone ever tells you that the plot of your lesbian historical romance is implausible, you can probably rest assured that it’s far more believable than the real life story of Mary Diana Dods.

8. Some people will try to tell you that the 19th century was full of passionate but sexless Romantic Friendships. Women who wrote sappy letters to each other full of elegant and overblown endearments, but who were far too much of proper ladies to engage in anything so vulgar as sex. But when you read candid biographies of women like actress Charlotte Cushman, such as the book When Romeo was a Woman: Charlotte Cushman and her Circle of Female SpectatorsI by Lisa Merrill, it takes a lot of willful denial to conclude that these were not romantic relationships in every sense of the word. Cushman not only enjoyed a series of romantic relationships with women drawn from feminist and artistic circles, but she was a wildly successful actress, especially in “breeches parts” such as Romeo, who attracted adoring female fans, and was the center of a community of artistic women, in London, Boston, and Rome whose careers she promoted through her network of social and political connections. Cushman had her faults. It’s hard not to be a little squicked at how she arranged for one of her girlfriends to marry her nephew so they could have an excuse to be close to each other without making her long-term female partner jealous. But just as with Dods, she led a life that you’d have to tone down a little to write plausible fiction.

9. Returning to actual fiction, the late 19th century era of decadent artists and self-consciously transgressive sexuality is the setting for Molly Tanzer’s historic fantasy Creatures of Will and Temper, inspired by a reimagining of Oscar Wilde’s The Picture of Dorian Grey. I loved how this tale wove together demonology, the aesthetic movement, and the maddening and loving relationship between two sisters. And it has a very delicious lesbian romance threaded through it that feels very true to the setting while never taking over the plot.

10. The question of where “history” ends and the current era begins is always tricky. I remember the events that inspired the movie Battle of the Sexes, based on the publicity-spectacle tennis match between champion Bille Jean King and has-been performative sexist Bobby Riggs. But the movie clearly treats the event as a period piece, so we’ll consider it a historical movie. One focus of the film that was less well known at the time of the massively publicized match was King’s on-going affair with Marilyn Barnett, depicted in the film as the team hairdresser. While the movie does the usual Hollywood condensation and rearrangement of the historic facts for dramatic effect. And, in my opinion, is far too kind to professional asshole Bobby Riggs, it does a good job of presenting the conflicts and joys of being a high-profile woman of the 1970s who is coming to grips with being in love with a woman.

11. No list of ten favorite things would be complete without cheating and adding in an extra. There are novels about the future that have all the feel of history--though sometimes a history we hope never happens. Claire O’Dell’s A Study in Honor is that sort of book, depicting a near-future America that feels entirely too plausible in its dystopic vision, through the eyes of a black lesbian army surgeon, trying to come back from a disabling injury, and her unexpected and eccentric housemate who is clearly engaged in dangerous espionage activities. Inspired as a reimagining of Sherlock Holmes, this thriller is the first in a series that thrusts two very different women into an uneasy partnership.

So that’s my year in lesbian history. I’m looking forward to what 2019 brings. Follow the blog and podcast and try to guess what will make my favorites list next year!

A brief tour through some of my favorite media consumed in 2018.

In this episode we talk about: