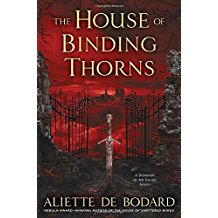 In this second novel in de Bodard's "Dominion of the Fallen" world, that world expands much further to encompass the dragon empire under the Seine and its political complexities and entanglements with the Houses ruled by fallen angels. As before, we get a dystopia of ruthless power and magic and the precarious position of ordinary mortals whose only safety is to tie their allegiance to a stronger being. But things are always more complex than that, as we see through the experiences of Madeleine, one of the carry-over characters from the first book, who hates and fears the head of her House but finds herself bound by both magic and loyalty to work for that House's stability.

The other major continuing character is the Annamite immortal, Philippe, who fails in his goal of keeping his head down and out of trouble. With another key character being a member of the dragon court, working as a spy in House Hawthorn, we get a deep immersion in the cross-cultural dynamics of de Bodard's magical Paris. My personal favorites (for obvious reasons) are the fallen angel Berith and her pregnant mortal lover Françoise. For me, the casual queer relationships in these novels are a major draw. And despite the constant violence and cruelty, there's never a whiff of queer tragedy being used to manipulate the reader's experience.

I fell like I'm not really tallking about the story, as such. De Bodard has a top-notch talent for world-building and efficient exposition. Her characters are complex and--well, "human" isn't always the right word--but believable, with motivations that drive the plot without ever feeling contrived. One of the other big things I love about these novels is how surprising they are. There are no well-worn tropes or predictable twists, and yet even the most unexpected turns make perfect sense and have been rooted in what came before. If you want to read something that is going to be a different sort of fantasy that any you've read before, check them out!